Istanbul was not named by the Ottomans, as it is usually thought. The name dates back to an even older source. It is a name of a person mentioned in a book titled Fütuh’üş-Şam from 9th century. The Greek King Timaeus’ son Istanbul works to construct the city for four years during his reign. However, the city is completed by Constantine, who takes his place. It is mentioned as Istinbolin in the 10th century book Tenbih (Mesudi). There is also a many other data about Istanbul’s name, some of which contradict with each other. Moreover, Istanbul has been referred to with dozens of other names such as Byzantion, Constantinople, Konstantiniyye, Asitane, Darülhilafe and Dersaadet.

The legendary conquer happened on 29 May 1453. This was also the date when the Middle Age ended. Istanbul rapidly develops during the Ottoman period. After the construction of hundreds of palaces, markets, mosques, schools and Turkish baths, Istanbul became one of the world’s largest cities where Jews, Christians and Muslims lived in harmony for 50 years.

Places to See in Istanbul European Side

Sultanahmet Square
It is one of the oldest and most popular touristic squares of Istanbul. Sultanahmet Square bears the traces of Hellenistic, Roman, Byzantine and Ottoman periods.  Being on UNESCO World Heritage List, Sultanahmet Square is among the most visited touristic centers of Istanbul as you have the chance to see Serpentine Column brought from Temple of Apollo, Hagia Sophia, which is one of the largest and oldest places of worship in the world, Blue Mosque well-known with its ceramic tiles, Basilica Cistern with its astonishing architecture and number of other historical artifacts.

Hagia Sophia
Hagia Sophia is the most visited building in Sultanahmet Square. Built in 4th century during Byzantium period, Hagia Sophia was used as a Christian temple for 15 centuries. Standing solid for centuries, the building was turned into a mosque by adding minarets in Ottoman Period. Turned into a museum in 1934, the building hosts countless visitors from all cultures due to its fascinating history. 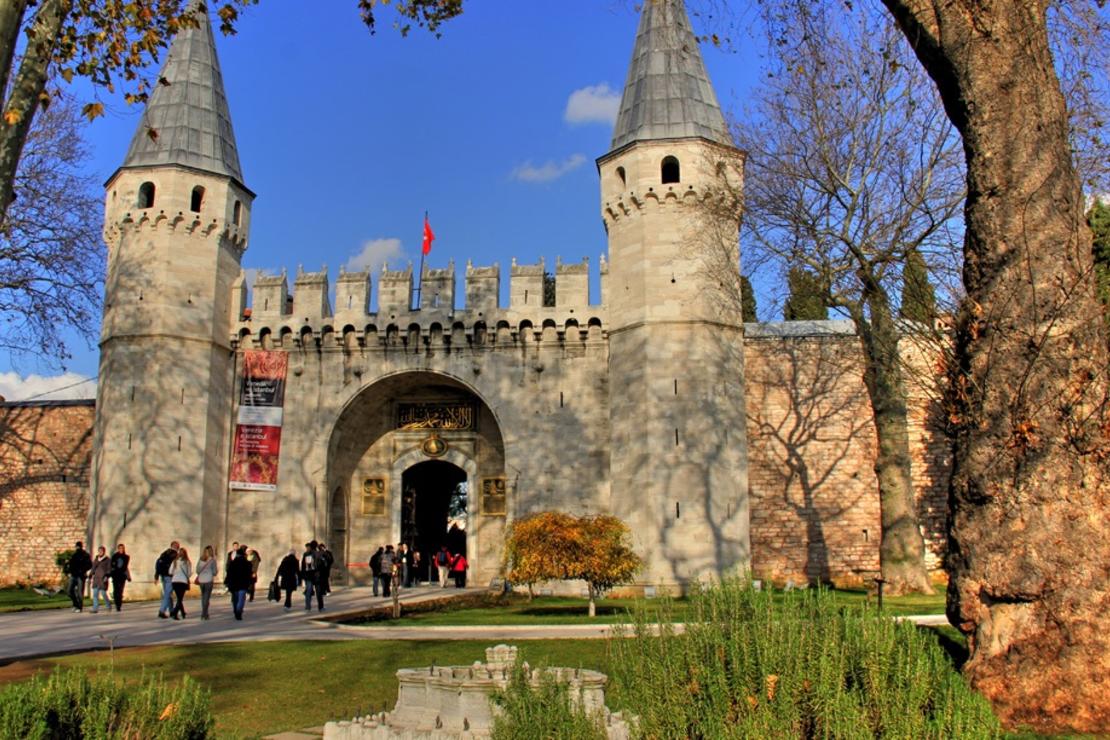 Topkapı Palace – Gülhane
The palace was built by Fatih Sultan Mehmed between 1460-1478. For four centuries, the Ottoman Empire was governed from this unique palace, which is one of the oldest palaces of the world.
It is covered with 1400-meters-long high walls. The area covered by the Palace is approximately 700,000 square meters.
Ottoman dynasty's outfits are displayed in Topkapı Palace.
When you visit the Palace, you can see the samples of Turkish jewelry work and other uniquely beautiful and valuable jewelry brought from Far-east, India and Europe to the Ottoman palace. State medals, chandeliers made of solid gold, ceremonial lanterns, jewelries, Topkapı dagger as the symbol of the palace and the largest and most valuable diamond of the world, Kaşıkçı Elması (Spoonmaker’s Diamond), are displayed in Topkapı Palace.
Ottoman Empire has conquered Egypt in 16th century and brought sacred relics that are important for Islam to Istanbul. Among those relics being kept in Topkapı Palace, there is also Prophet Muhammed’s coat in a valuable box.

Panorama Museum
It is the only panoramic museum with covered top in the world. It causes visitors to think themselves being in an open environment even though they are actually indoors. It takes visitors to a time travel and makes them feel as if they are in the middle of Conquest of Istanbul.

Grand Bazaar
Known as the oldest market and bank of the world, the construction of the bazaar was started during Fatih Sultan Mehmet’s period and rebuilt during Suleiman the Magnificent period.
Located on an area of 4500 square meters, Grand Bazaar is the largest and oldest shopping mall of the world, with its 3600 stores.
The bazaar with remnants from Byzantium period hosts countless visitors.

Spice Bazaar
In 1660, its construction was ordered by Hatice Turhan Sultan, mother of IV. Mehmed, to architect Kâzım Ağa and came until today after some restorations in years. In the period when it was built, there were sold various spices and cure-all herbs coming from Far-east countries, ranging from India to Arabia.
It is the primary location for mostly spices, herbal teas and traditional Turkish flavors, such as Turkish delight.

Eyüp Sultan Mosque and Mausoleum
Ebu Eyyubi el Ensari is a person who hosted Prophet Muhammed in his house in Medine. Ebu Eyyubi el Ensari comes to conquer Istanbul upon a hadith of our Prophet. He passes away when they reached at Istanbul borders due to his old age. This mighty commander whose biggest desire was to conquer Istanbul is buried near Istanbul walls. When Fatih Sultan Mehmet conquers Istanbul, his mentor Akşemsettin sees, in his dream, where St. Eyüp is buried. When the tomb is opened, they find Eyüp el Ensari’s body with a bronze seal in his right hand in a cerement painted saffron, despite all those years. Here, Fatih Sultan Mehmet has ordered a mausoleum and a mosque to be built, and building complexes around them. 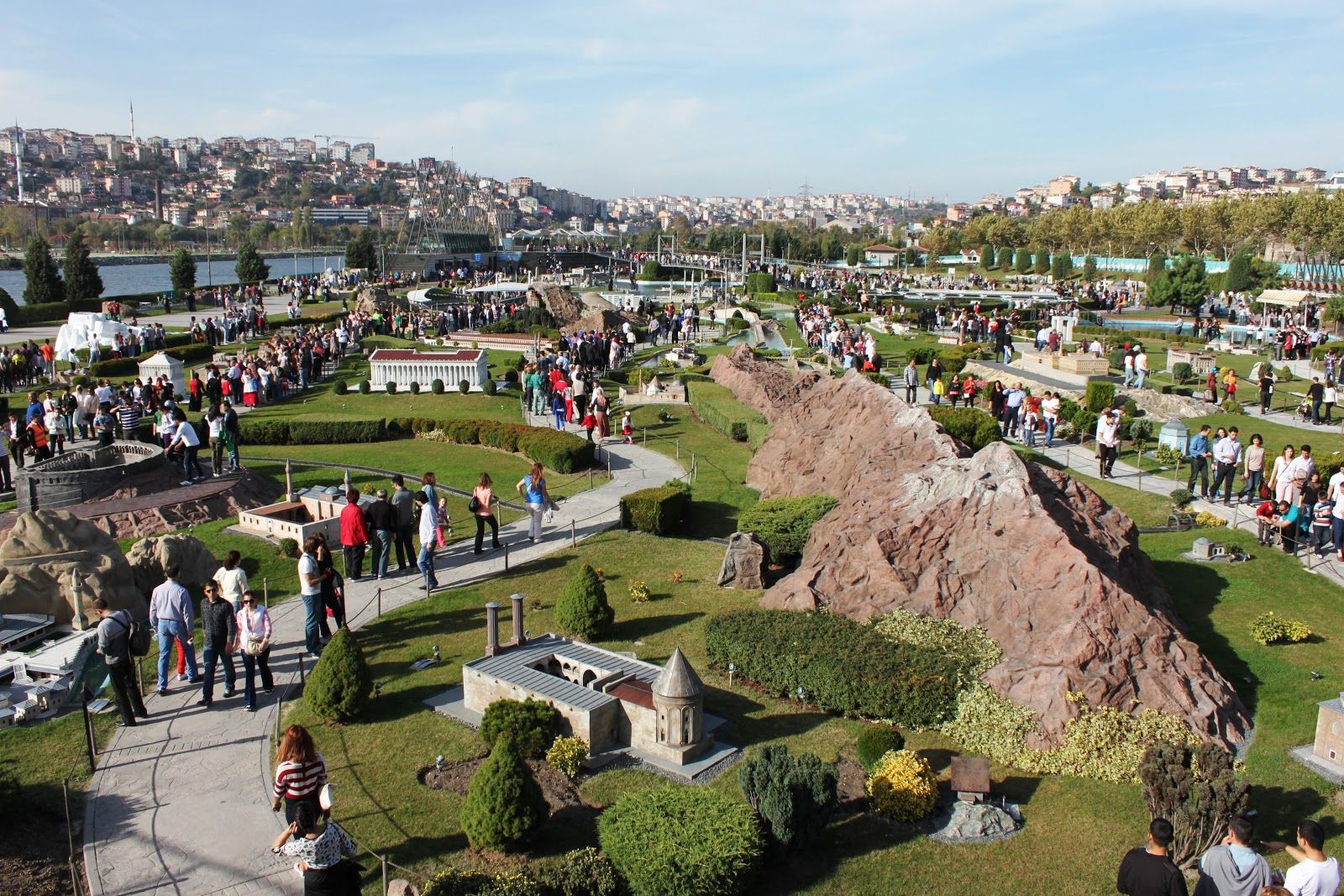 This theme park where you can see 1/25 scaled miniature copies of 134 architectural works built in Anatolia in 3000 years and on the lands ruled by Ottoman Empire hosts countless visitors.

Ortaköy
Ortaköy is right under the Europe column of Boğaziçi Bridge. Ones who want to enjoy the Bosporus should definitely stop by Ortaköy, which is one of the first places that comes into mind about Istanbul.

Bebek
You can enjoy the Bosporus of Istanbul in Bebek where there are countless cafes and restaurants.

Emirgan woods
First settlements in Emirgan were in 16th century.  Grand Vizier Sokullu Mehmet Paşa gifted it to one of his marksmen, Feridun Bey. There are 3 mansions in it.

Dolmabahçe Palace
It was built by Ottoman Sultan Abdülmecid (1839-1861), modelled on European palaces. It accommodated 6 Sultans and latest Ottoman Khalifa Abdülmecid Efendi. It was used as a Presidency Office between 1927 - 1949. Gazi Mustafa Kemal Atatürk, founder of the Republic of Turkey, used Dolmabahçe Palace for his works in Istanbul between 1927 - 1938 and passed away here on 10 November 1938.

Taksim –İstiklal Street
Having the highest amount of visitors in Istanbul, Taksim İstiklal Street is closed to traffic and can be toured by nostalgic street car. With its historical environment, it offers entertainment and movement for 24 hours.

Galata Tower
Initially, it was built by the Emperor of Byzantium in 528 as a light house. In 1348, Genoese reconstructed it by using stone. Being used for defense purposes for a long time, the building started to served for different purposes after Ottomans gained control of Istanbul in 1453.
By its location, the whole city can be observed here.

Wax Sculpture Museum
The largest Wax Sculpture Museum, ”Madame Tussauds”, is also in Istanbul.
In this museum located on Istiklal Street, there are sculptures of approximately 60 famous people in fields of art, sports and politics from Turkey and world. 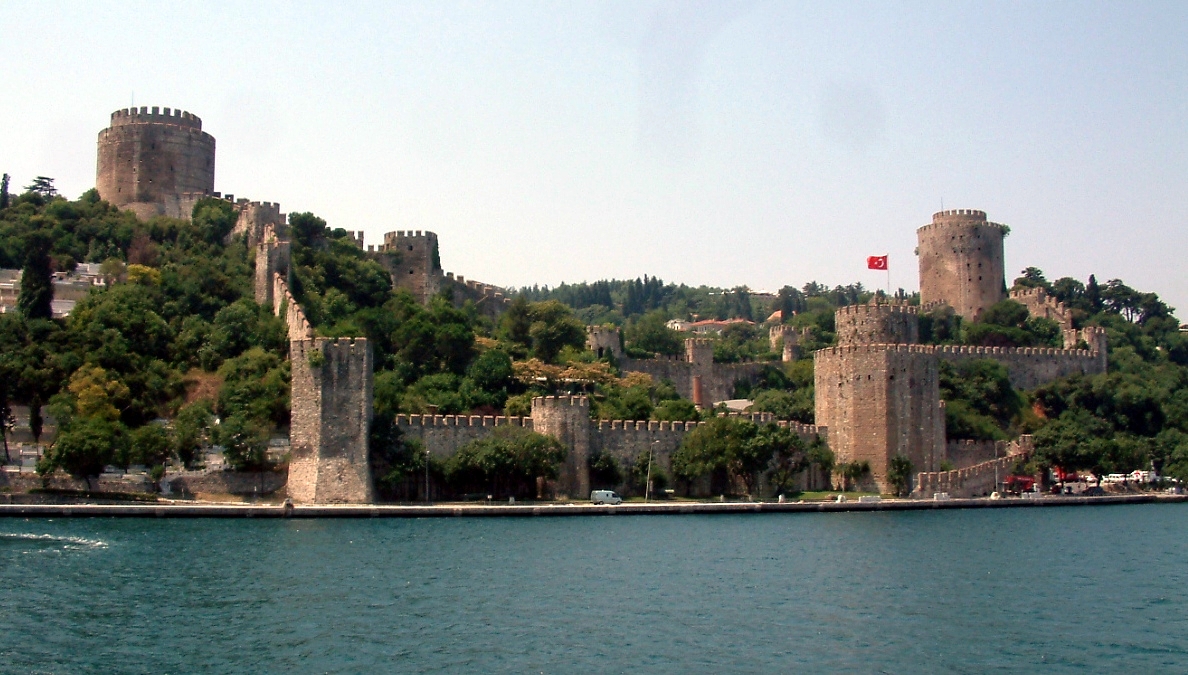 Before the conquest of Istanbul, its construction was ordered by Fatih Sultan Mehmed right across Anadolu Hisarı (the Anatolian Fortress) in order to prevent any possible attacks from the north of Bosporus.

Places to See in Istanbul Anatolian Side

Kızkulesi (Maiden’s Tower)
The building remaining from Byzantium period was built on a small island near to Uskudar district. Having been built in 410 BC, the tower was for supervising the ship traffic on the Bosporus and collecting taxes from them. Today, it is operated as a restaurant and museum. It is one of the best places where you can view the Bosporus.

Kadıköy
It is one of the central districts of Istanbul, seeing Marmara Sea shores. Having a heavy pedestrian and road traffic every hour of a day, Kadıköy is mostly popular for entertainment and shopping.

Çamlıca Hill
It is the highest hill of Istanbul. It is one of the places where you can see the city view best in Istanbul.

Bağdat Street
There were water fountains and open-air mosques at the place where we call Bağdat caddesi today. Being intense during whole day, Bağdat street has number of stores, restaurants and cafes.

Beykoz Anadolu Kavağı
Anadolu Kavağı is a small shore and fishing town attached to Beykoz district of Istanbul.  With its fishing boats on its coast, green hills and houses with Bosporus view, it is worth to see.

Beylerbeyi Palace
It was thought to be a summer house for Ottoman sultans and a State’s Guest House for foreign state leaders, and it was build upon the request by Sultan Abdülaziz (1861-1876).

ISTANBUL CITY TOURS ARE PLANNED ACCORDING TO WISHES OF OUR DEAR GUESTS.