Antalya Population : 2.288.000 With beautiful bays and its cultural infrastructure embodied many civilizations in history, Antalya is a tourism paradise for many travelers. With its ancient cities, museums, waterfalls and blue bays, there are many places to visit and see in Antalya. Some of those are... Places to See in Antalya  KALEICI It has always been very pleasurable to walk around historical streets of Antalya. The most important places to see on its historical streets are Hadrianus Door (Three Doors), a Seljukian building Grooved Minaret and Old Port. Try not to ignore these places.

ANTALYA MUSEUM
The museum where rich archeological findings of Antalya and surroundings are displayed has won the European Council Special Award after being moved to its current building in 1972.

DUDEN WATERFALL Duden Waterfall is approximately 15 km from the city, and it falls to the sea from 50 meters height with a great noise. Only this feature of its is one of the rare natural beauties to see. 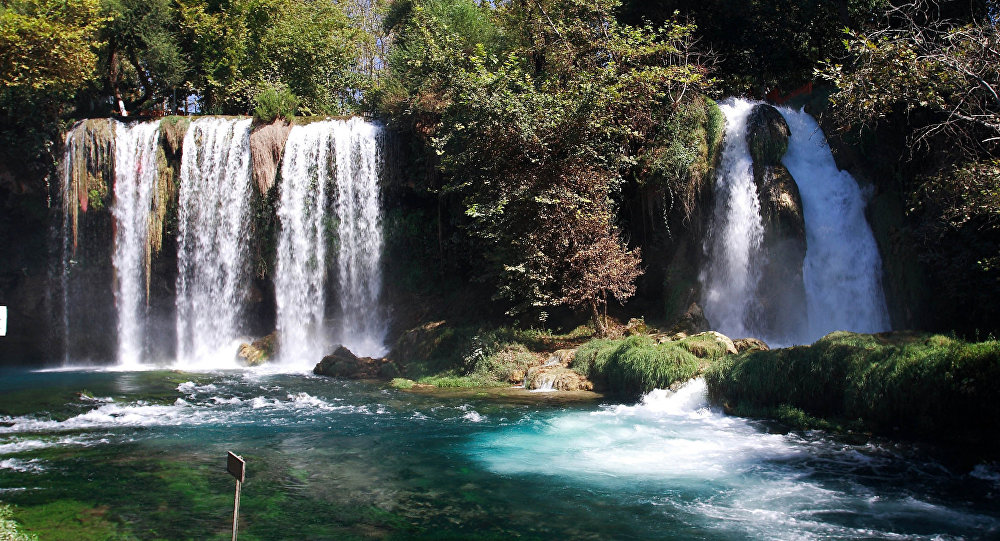 KONYA ALTI Konyaaltı Beach is one of the two largest beaches of Antalya. You can enjoy warm or tidal wave of Antalya sea, according to the season, from gravel coast.

LARA BEACH Located outside of Antalya, this sandy beach is a tourism paradise today.  IF YOU WANT TO LEAVE THE CITY FOR A LITTLE WHILE!

KARAIN CAVE In one of the biggest natural caves of Turkey, Karain Cave, there were found traces of a settlement starting from Lower Paleolithic age and lasting until late Roman period. It is one of the most important archeological sites of Turkey.

PERGE ANTIQUE CITY Being a quite developed Antique-age city as it was located on important trade routes, Perge is also important for Christianity too as it was a frequent destination for some saints. We suggest you to have a walk on especially Sütunlu Street of this fascinating city.

TERMESSOS Being one of the best preserved antique cities of Turkey, Termessos is known with its 4000-people capacity theatre. Included in National Parks, the city is among the places to see with its temples, agora and fascinating theatre.

CIRALI-OLIMPOS Çıralı, a little coastal town, is well-known with its tree houses used pensions. Located on the south of Çıralı, Olympos ruins is a very important antique site, mentioned in many myths. Chimera (Yanartaş) on its north is also a mythological site; there are fires burning between rocks without going down because
of the coal gas leaking from beneath rocks.

PHASELIS Being accessible both by land and sea, this antique city is known as the most important coastal town of Eastern Lycia. Its three piers confirm this information. Even the ruins indicate the importance of trade in this city’s life.

KEKOVA The sunken city located between Kaş and Demre is accessible by boats rented from Üç Ağız. It is forbidden to swim where there are ruins but it is allowed in the areas without ruins.

ASPENDOS This antique city is known with the Roman theater built in 2nd century AC. Being the best preserved theater of Anatolia, this building is really magnificent.

SIDE MUSEUM In the museum, mostly antiques found during diggings made in Side antique city are displayed.

MANAVGAT WATERFALL ALANYA CASTLE AND SCARLET TOWER Alanya Castle with 6.5 km-long walls was built by Seljukian Sultan Alaaddin Keykubat who conquered and rebuilt the city in 1221. The castle with its 83 towers and 140 bastions is the most magnificent building of Alanya. This building is more distinctive with Kızılkule (Scarlet Tower) which has become the symbol of Alanya and its castle. Inside of Kızılkule is used as an ethnographic museum. 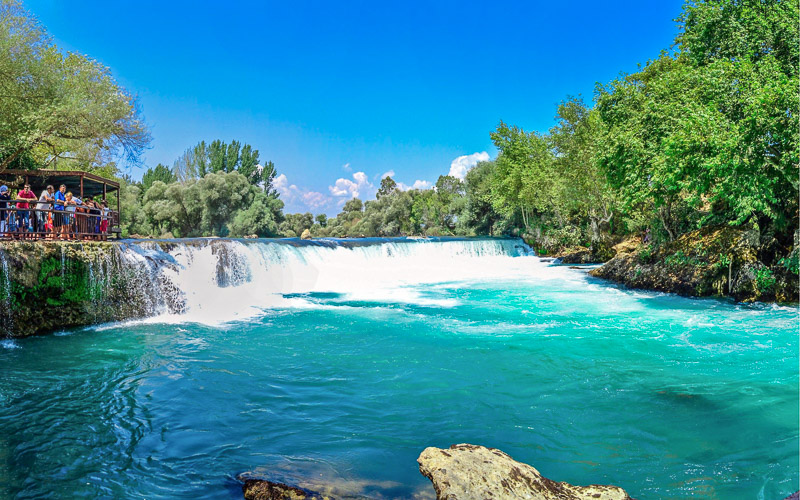 ALANYA MUSEUM Consisting of archeology and ethnography departments, the Museum was opened in 1967 with artifacts from Paleolithic Age, Urartu, Phrygian and Lydian periods. It has reached today by expanding and getting richer.